Drawing a Game From Nothing: Concept Art

Concept art is funny to me, because it's usually the first step in any project I start, but it's also probably the most expendable as well.  Most typically, if you have an idea for a game totally cemented in your brain and it's already good to go and you don't have to convey these design ideas to other people working on the game then concept art is actually kind of redundant.

But what concept art does it does well: concept art is a grinding wheel for the hatchet of your imagination.  You always have to understand that you don't have eyes inside of your brain, so spilling your ideas out onto paper and then taking them back in with your actual eyes might result in you realizing that this idea only worked in my head oh my god what was I thinking this is stupid.

And it's important that you catch that before you start developing a game rather than halfway through when it's too late to make changes without spending months redoing what you've already worked on.  That is a right pain in the ass.

So I like to get right into the basics of the game's rules and design right away with concept art, and that's what I did for this project!

Figuring the game out 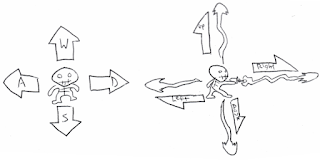 Okay, so I drew the movement style I want to go with: kind of a Binding of Isaac style twin-stick shooter setup.  I usually like to make my games either platformers or arcadey, and since Gabe is making a platformer I decided to go with the arcadier approach by going twin-stick.  Robotron 2084 is, after all, one of my favorite arcade games and Binding of Isaac is what I would consider a perfection of that kind of gameplay.

But now I really need to get a grasp of what kinds of gameplay nuances I'm going to include.  Do I want for the player to fire projectiles like a madman, charge up shots, use ammo, etc. etc. etc.  Well, I kind of need to know what kind of game I'm making.  I drew a skeleton as a fun point of reference guy, but what if I follow that idea?

Skeleton is turning blob monster there into a bag of bones for a disguise!  So now I've somewhat forgone the arcade-style idea of a simple twin-stick shooter and am now focusing more on an Escape from Castle Wolfenstein feel (the original Muse Software game, not the id FPS game).  Escape from Castle Wolfenstein is a bit rougher around the edges than Binding of Isaac, but I consider that a good thing: Wolfenstein has lots of flawed-but-fun concepts that I can improve upon, whereas trying to compete with Binding of Isaac would be a futile uphill battle.

If this is going to be a stealth game, combat is going to have to be very deliberate.  Why on Earth would you choose to be stealth if you can just rain bullet Hell on your foes?  So the standard attack will require the player to stop, making them vulnerable, charge for a second, then unleash an instant bolt which will immediately hit what is in front of them; having the attack lag on a moving projectile would be way too annoying to handle.  By allowing the player to get an instant shot off after waiting a second, this will encourage players to sneak to a location where they can charge and shoot an unsuspecting enemy.  An additional second of recoil will add to the frantic nature of trying to get in and out of a situation where you might have a lot of enemies around.

But what if the player hops into a disguise?  Can't they just walk through the level with impunity then?

The disguise is impermanent, but in case a player ends up with a rotten disguise in the middle of a room full of enemies the busted up disguise can act to absorb one hit so you have a head start in getting the Hell out of Dodge.  I've considered making it so the player can't grip weapons when they're in disguise as well, which would create interesting trade-off for meta game where the player can choose to go non-lethal while in a rotten disguise so they can tank an extra hit.

So all of this would be all fine and dandy if the game only has one or two types of enemies.  But I want to include a lot of variety, and part of that will be enemies that don't go down in a single shot.  You could risk taking pot shots at them with the pistol, but maybe I can also have a temporary weapon that allows the player to tank through certain portions of the game- to break up the stealth tension with occasional bouts of raw POWER! 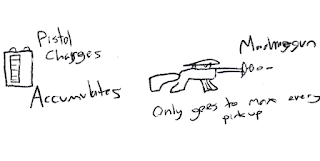 And there you have it.  No, really, that's just about all that you really need for the gameplay portion of the concept art when you're first starting out.  I just decided a bunch of the gameplay with invitations for meta that I can improvise on as I make levels and design enemies.

Well that was all of the technical aspects of the game that I want to have laid out before I begin developing.  What about a visual style?  That should be more interesting right?

Absolutely!  If drawing the same thing over and over again in different ways is interesting to you, you freak. 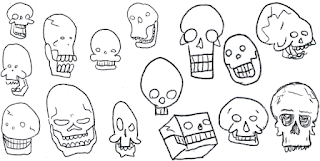 I'm fairly certain that any tattoo artist would probably agree with me that trying to make a skull interesting and have unique character is asking to fight a losing battle.  Skulls have been done to death.  They have the benefit of having distinct characteristics that immediately give away that they're a skull, but the concept is so tired that it's just so difficult to make something with its own charisma.  I still can't wrap my head around how Toby Fox managed to create two different iconic skull faces in Undertale.

After a while, however, I started to get a feel for what direction I wanted to take the art in. 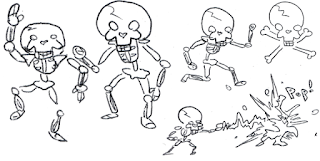 Once you get into that mode of refining a concept, eventually you land on something you'll be more than comfortable working with. 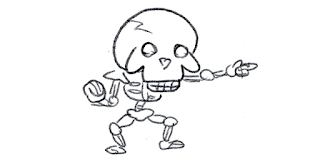 With a skull much larger than the rest of the skeleton, he's got a cutesy look to him which is only enhanced by turning his nose-hole into a heart.  But with the bones as thick and bulky as they are, he doesn't look totally frail either.  It almost comes across like a carapace rather than an endoskeleton, and I'm totally cool with that.

I also tried to concept some blob monsters, but those need a lot more work before I'll be happy with them. 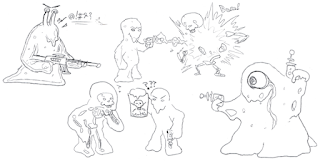 I think the blob monster with the big eye might be the one I'm the happiest so far.  The thought of the monsters having big ol' eyes for faces which get replaced by a skull face when used as a disguise just tickles me.

All work and no play

Finally, I'd like to leave you with this helpful tip that is pretty important to remember about concept drawing: even when you make your concept art as doodly as I do, it's still art, and artists can have moments of breakdown or block.  If that happens, you just have to draw through it.  It doesn't matter what you draw, but you've got to draw something. 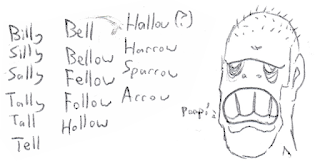 No matter what it is, just draw until you start to feel inspiration again. 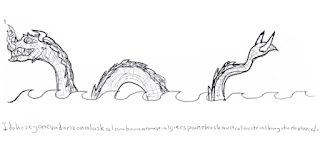 Even if it doesn't make a lick of sense. 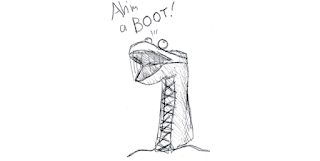 Gabriel's Comment: William and I once made a little something called Four Play. It was a four-way breakout game. You controlled all of the paddles at once by moving the mouse. We both thought the idea sounded like an entertaining little project, all the way up until it was playable. When we could actually play the experience, we found that there was no intuitive way to control the paddles and aiming was a chore. Like touching the stove, or bowling, the idea was functionally less fun than anticipated.

For the first time, in Dueling Devblog history. I respectfully disagree with William's method.

Fun is a hard thing to pin down. It's elusive and as William so eloquently put ~ "...you don't have eyes inside of your brain, so spilling your ideas out onto paper and then taking them back in with your actual eyes might result in ... this is stupid." Prototyping is game design doodling, it's a method of discovering what is functionally fun.

All of that said, all of this has value. Shaping theme and style takes time and all of the above work contributes to that. Further, William's personal projects consistently feature tight and engaging gameplay. I've always felt like he has a better grip on what's practically fun while coming up with ideas. So history would suggest, his skill in design allows him to make just about anything fun with enough tweaking. I can't wait to jump into some blob dudes!


Let us know what you think, who do you agree with? How do you get started on your games?