On an indie team, being efficient with your time is important. As a solo developer, it's imperative. Traditionally, when adventuring into the early artist process for video games, you'll have piles of concept art, mood sketches, character concepts, often even prop art concepts. You'll find an art team deliberating over details in a way an individual just can't. So how am I possibly going to make an attractive game solo? By being strategically artistic.

I'm going to build a character. My game is still in its infancy, so character art isn't the most important task on my list. However, this is my review process. By finding a design I like early on, I can see it in action and consider its weaknesses throughout development. Without an art department to critique my work, I need this sort of self-analysis along with community feedback. I want to work with a character that's lovable and memorable. Also, maybe a robot.

My first step is to clearly define what I need to communicate visually. I know that I want the player's feet to feel powerful to suggest that jumping off of things is how you deal damage. I also don't want to include text in my game, so I'd like to be able to emote a lot through the character. Generally, really expressive characters require a lot of animation, so I needed to figure out a way around that for this solo game.  I came up with this little fella while imagining a character with a holographic iMessage-ish head: 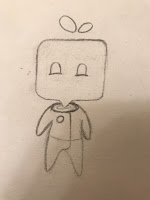 So with this design, I can make the head a separate object. I can then animate facial expressions and communicate through imagery projected on the face, all while looping animations for the body. Quick and efficient expression, one goal met. However, the legs look weak and I want the art for this game to be a bit more involved than the above style, so I sketched a bigger version: 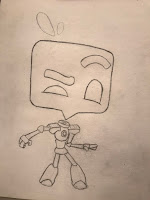 Closer to what I want, but the legs still aren't grabbing enough attention. I decided to take this design into 3DS Max. Having done 3D art far longer than game design or drawing, I feel more comfortable tweaking a block out quickly in 3D space. 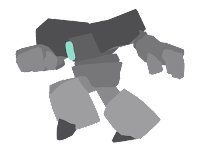 I ended up squashing down the body and making it bulkier to better fit within collision boundaries I like. I've clearly amped up the legs, but because I've also intensified his shoulders and hands, they aren't carrying the weight I want them to. The above is a rectangular silhouette, if I want the base to feel like the heaviest point, perhaps a triangle would work better. 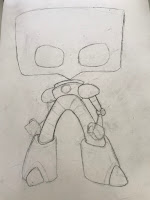 The triangular shapes wonderfully depict the composition I was aiming for!  This design feels way more powerful and deliberate. I'm still able to emote efficiently, the feet are obviously the most powerful part of the body, and I can fit the character within my preferred collision boundaries. Ultimately, removing unnecessary detail and refocusing on the visual information I need to communicate was the solution.

I decide to head back to 3D. I'm thinking I want to do 3D flat lit characters rendered into sprites with 2D handpainted environments. My logic is really just that I have plenty of experience with both of those things. I would never recommend exclusively sticking to what you know, but learning to program is enough educational exploration for one game.

Ended up throwing in more detail than I had anticipated, but I'm pretty satisfied with how they're looking. I don't want to get too attached to any part of the character this soon, so I've kept them very modular. Preparing for inevitable changes to your art and style is imperative this early on. Gameplay takes priority over visuals, so I don't want to limit myself with something that's difficult to tamper with.

All in all I'm off to a good start! The world for my game is now brimming with color in my imagination. I can see an iconic personality for my character and ways to make design points clearer than they could be without him. Best of all, the time commitment to this early character draft was pretty small. Now with a clear vision for my experience, I can really start work on building a world. There is a lot of work to do, so I'd better get movin...

William's Comment: I've been waiting to see an art blog post from you this whole time because, while you're quite adept at game design and finding fun in prototyping, art is an area where I frequently find a loss for words when observing your process.  Even with super-fast time-saving techniques and a full preparation to change up the design in the future, what you've created has classic design, a world of opportunities for emotion and dynamic action, and a robot look more fun than Keiji Inafune has been capable of since Megaman X.

The holographic speech-bubble head especially gives an outstanding contrast which is mirrored in the color design: a soft, cute, baby-blue head with rounded corners, curious bright eyes, and clearly delicate in its holographic artifacting emanates from a a red-and-grey metal, boxy, agile-yet-powerful mechanical hard body. Its body is powerful and hardened, but the personality is curious and delicate.  All I've got in my game is a goofy looking skeleton.


If I had to give any advice moving forward, it would be to be wary of how you convey perspective in a truly 2D game.  In fact, even in 3D platformers the following could be an issue: perspective shots can lead to imprecise platforming.  While your character seems to be rendered orthographically,  he seems (at least in some images) to be rendered with a non-orthographic world in mind.  That is to say, that the character's feet won't be even on the ground.

Since your game's prototype shows an emphasis on precise jumping that controls evasion, attacking, navigation, and everything, allowing for absolute visual precision through an orthographic view would be optimal.

For the people reading who may not know what I'm talking about: Orthographic projection forces a perspective in which objects are displayed without perspective, usually as having very clear border edges and straight lines.


That's part of why games with lots of precision platforming like Super Meat Boy or New Super Mario Bros (both pictured below), or even Sonic The Hedgehog or Megaman keep an orthographic perspective for the most part.

When there's a bit of leeway to what can be considered a the collision line of a surface, scenarios with perspective look nice most of the time, but are better suited for games that rely less on platforming and maybe more on combat or collecting items.  It's a style typically best for less movement-intensive games like Kirby or Commander Keen (both pictured below).

Anyway, I'm merely commenting off of what was likely a test render, but I still hope it's something you keep in mind as you continue your design (confirmed that you were already planning to go ortho after a short conversation in Skype, whoops).  If it was something you were already considering, then I hope that at least the readers got to learn something interesting!


Got questions, opinions or cool early game art to show off? Put all of that into the comments!