Dumping a Project for a Hotter, Younger One

It's been a while since my last post.  I'll cut to the chase: for a bunch of reasons I'll briefly go over in a moment, I've switched from working on my previous project, Bone Boy in Blob World, to a previously halted project that I feel has a more promising future.

So, without further ado, I'd like to introduce you to the game that I have been working on for the past few weeks:

I don't currently have a name for this project.  Its working title during test compiles has been simply "Game X," though I think that attempting to self-refer as a game and claim an entire 1/26th of the alphabet is a bit pretentious for the project's objective.  Plus, I like titles that actually describe what the game is about in some way, so that plays a factor too.

"Game X" was a short project I started a couple years back when I was between computers and wanted to have some kind of mini project that I could establish super fast and add to over time, while not putting too much burden on my crummy laptop.
Since I've spent months describing the process of Bone Boy's genesis on this blog, it's only fair that I should fill you in on why this project is so much better for me to work on.

The first major upside to working on "Game X" is that there's a lot I can put into it while staying consistent.  With how general the game's objective is, I can pull out all of the stops and add tons of interesting set pieces, settings, and changes in gameplay. 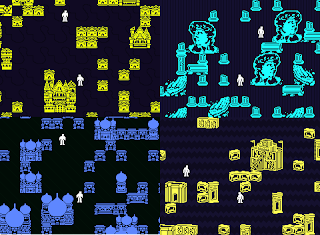 The biggest worry I had with Bone Boy was that, to stay consistent to the game's gimmick, I would be extremely restricted and would need to crank creativity from heavy limitation.  Now, oftentimes art with limitation breeds creativity, but making a game that's mostly about stealth and body snatching with a very sci-fi blob planet setting opens itself up to maybe 7 different types of levels, tops, and I just wasn't going to be satisfied with that.

I definitely should have realized this would be a problem earlier on, when I was driving inspiration from mostly games that are either really short or have a problem with becoming repetitious.  For example, one of my biggest inspirations for the gameplay of Bone Boy was Escape from Castle Wolfenstein on the Apple II, which had one setting, two weapons, and two enemy types.  While I was hoping to squeeze far more water from that rock, it became apparent that anything added would either be an extension that tires the game's formula, or something that subvert's the game's formula but negates the game's gimmick, creating a feeling in the player that perhaps the game would be better if the gimmick were ditched altogether.

To anybody who doesn't develop, deciding to switch projects on the basis that another one would just be so much easier sounds lazy.  But to a developer with an exhausting full time job and barely two days a week to work on a project, it's the difference between making a game and being Sisyphus.

Not only were many of the gameplay ideas and character AIs in Bone Boy extremely complex, but even making the graphics the way it was planned would have been quite a gargantuan task to be completed on my own.  That's not to say that it couldn't be done; however, when making resources for a game is far easier then not only do I get to see something that looks like a finished project sooner (which is great for morale and allows me to release decent screenshots earlier), but it means that I can make more content and easily go back to replace content that doesn't quite make the cut instead of just leaving something shoddy because a replacement would be too time consuming.

Every step of the way with Bone Boy would have been an arduous task, mostly concepts that I wouldn't have time to complete within a day, broken up across several weeks.  With "Game X," I have found myself throwing in features within a day just because it seems like a fun idea because it's just so easy to implement new, fun stuff.

The biggest draw of "Game X" over Bone Boy is that it's absolutely the type of game I want to play.  Now, Bone Boy sounded like fun when I first started it- I thought of some fun gimmicks and some games that I could model it on that I liked, but at the end of the day Bone Boy was going to be a stealth game made by a guy who generally doesn't like the stealth game genre.  The stealth games that I enjoyed and was taking inspiration from, as mentioned above, were short, full of problems that stemmed from its design, or repetitious as all get out.  If I were to make this game, most of the target audience (stealth gamers) would be pretty uninterested in my take on the genre because I just really don't have the same interests as they do.  It's like if I want to build a new type of car for a bunch of gearheads from scratch and I don't even know how a differential works.

"Game X" is a game that I would likely buy if I saw the finished product's trailer, and I would probably discuss its content at length on message boards while checking its wikia for secrets that I haven't found. It's a game full of exploration, weirdness, secrets, content that you're likely to never see in all of your playthroughs, expanding player abilities that make you better at every aspect of the game in a multitude of ways, and you can alternate at will between getting lost in arbitrition and making actual progress.  These are things that come together to make a game I really want to play, and that fills me with passion and excitement as I execute each new idea.  Sometimes I even incorporate multiple features a day, which was unheard of when I was drastically overthinking the process of creating features in Bone Boy for weeks before even starting real work on them.

So, because of all of those (and a few other practical reasons I didn't have time to cover here) Bone Boy is going back to the drawing board while I work on a project that is not only closer to my heart, but more likely to be large scale game that gets released in a reasonable amount of time.

So in two weeks, get ready to go back to basics with my new project.

Gabe's Comment:  I first have to start by referencing a discussion we had early on in the blog.  I think working on a prototype before brainstorming visuals would have saved a bit of time. There is a huge problem in the indie game community of developers drowning in a sea of half-finished projects. Game ideas almost always sound better in theory than they work in practice. Which is why I think early, sloppy prototyping should be ones only focus before committing to a project... Now, allow me to dismount my high horse.

I think this was a good choice and I'm excited to see more. I'm sad to see the hand-drawn graphics go, since that style is something you've been talking about since the day I met you. However, I absolutely agree that this game's core is way more inline with you as a developer: stuff that is as baffling as it is intriguing, things that are found somewhere between profound and utter chaos, that's William's bread and butter. For reference, this is an art project he made in the first grade: 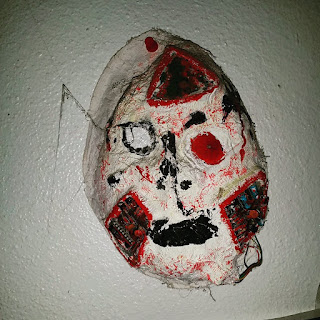 
If that doesn't say "weirdo," I don't know what does- and this game is weird. What I've played of it so far, I've thoroughly enjoyed. I've even been asking William to upload updates to Dropbox so I can play more! William has been tweeting frequent GIFs of the project, so if you want to see more of this game right now, check out his twitter.

In conclusion: HA, GOTCHA! But also, this looks great and I'm ultimately really excited for it.

Have you ever had success in a project after abandoning a project that had you stuck in a rut?  Let us know down below!