I'm working on a game that randomly generate pseudo-infinite landscapes that you are expected to leave behind as soon as you're capable of doing so, never to see them again.  Through certain inherent patterns in hopping between worlds and overcoming certain challenges, the player can begin to uncover secrets, a greater continuity, and, most importantly, player upgrades and items.

Setting up a world of possibilities

I had originally started working on this game some years ago with a concept that only included the player character running around in randomly generated worlds, hopping from portal to portal.  There were no interactive elements other than the portals, and the player certainly didn't have any tools to work with (other than their legs, which they use to move around).

While the game worlds still require lots of fleshing out, they're currently made of certain elements: world tiles that impede movement, NPCs who the player can engage in dialogue with, enemies that the player must avoid, and portals that launch the player into the next world.

But, if the player can only run around, surely interaction within the world will become stale, and possibilities for gameplay ideas will run low.  That's when I introduce player upgrades and tools to multiply what's already there via new dynamics.

When the player starts the game, the very first tool they're given right away is the Tabula Rasa.

Using the Tabula Rasa, the player can instantly jump to a safe home area I'm currently calling The Void.  The Void is a jumping off point for the player where they can take their pick from a more varied and dense selection of portals than the player is likely to find in a single world.

There's a downside, however: making progress in the game requires that the player hop from world to world in consecutive succession.  The Tabula Rasa allows the player to instantly access this area, which is great if all you're looking for is a new environment, but this also sets the player back to square one in terms of attempting to explore deep into the multiverse.  It's a kind of blunt-force reset button for the player's current excursion, useful for it the player needs to restart an exploration pattern or escape from a situation where they find themselves trapped.

It's a clunky, imprecise tool that comes with some drawbacks from use.  It completely shifts the situation the player finds themselves in.  So, what's a good followup tool for the player to obtain next?

A Tool of Precision: The ShockWand

Obviously the player isn't going to want to deal with every situation by hitting a reset button.  Sometimes the most powerful tool is one that allows you to manipulate only a single aspect of your environment at once.

That's where the ShockWand comes in.

The ShockWand is a destructive tool that allows the player with small aspects of the worlds they explore.  A small obstacle in your way?  Blow it up.  An enemy closing in on you?  Blow them up.  An NPC getting on your nerves?  Straight up murder them.

The ShockWand is one of the most conventional tools in the game, and one that you wouldn't expect to leave home without.  However, it's not a tool that you start with and you may often find yourself in situations where you can't reliably use it.  What may appear to be a standard given in a player's arsenal in most games is a privilege, not a right, in this game.

Since the player is expected to progress through the game up until the point where they obtain a ShockWand without one, much of the game includes aspects of gameplay where the player may be required to walk around annoying obstacles or retreat from enemy ambushes.  After learning much of the game this way, as a passive and fearful trespasser in these worlds, the ShockWand paints everything that the player knows in a completely different light.

The game transforms from needing to explore on the environment's terms to making a path on your own terms.

The main drawback of the ShockWand is that it's clunky to use; to use it, the player must activate it, stand still, and then press the direction in which they wish to send a lightning bolt.  Once the player activates it, they must send a lightning bolt in one of four directions.  It's also not a tool that can be used in rapid succession, as it (like most of the tools in the game) has a cool-down time, which may make the player less than capable of dealing with more intense combat situations.

Compromising Precision for Power: The StaticBlast

Let's say that you do get ambushed from all sides by enemies and need a quick out, but are so deep in your travels that using the Tabula Rasa would waste too much progress?

The StaticBlast may be the solution you're look fo-
The StaticBlast is an absolute wrecking ball of a tool.  Planned to require an ammo supply to use, the StaticBlast is how you can get the safety and complete shift in situation that the Tabula Rasa gives you without necessarily needing to hit the restart button.

It destroys everything and, unlike the ShockWand, can be used on the go.

This is exactly the type of power-trip tool you use when you're either in an extremely hostile environment or just really want to make an entire world your bitch.  It creates a path of destruction that is unparalleled by anything else the player gets in their inventory, though if the player is attempting to find certain objects or NPCs in a world they may end up obliterating them on accident.

For example: most of the game is spent hunting for portals to the next world.  Eventually, this task is going to become tiresome.  The best way to alleviate that?  Give the player an item that scans for nearby portals, of course!

What's the design benefit of slowly giving players these tools?

This is a pretty old design trick, used in games from Metroid to Megaman to Bioshock, to make progression in a game feel good while evolving what kinds of tactics the player can use to proceed through the game.

By giving the player these abilities over time, the game allows the player time to explore the world without convenience.  The beginning stages of the game will be slow and require the player to be fast on their feet for what amounts to fairly minimal progress.

Once the player obtains the tools it will mean the world opening up and becoming easier to traverse.  Every upgrade or tool allows the player to move faster through the environment toward real progress, accelerating the game and allowing the experience to shift and change at a very natural pace.  Instead of the player taking these tools for granted as they would if they started with them right away, they will have real meaning.

By moving from having no weapon to having a weapon, the player will feel so much more positively about the weapon than if they had it from the start, and will be able to look at enemies as opportunities to succeed where they once saw unstoppable threats.  And, really, what's more rewarding than that?

Gabe's Comment:  I like the idea of  shifting rapidly through many strange and interesting worlds. A problem I often run into with procedural worlds is the feeling that they would be more beautiful if they were pre-produced for me. Games like Minecraft and its infinite kin allow me to do the beautifying myself 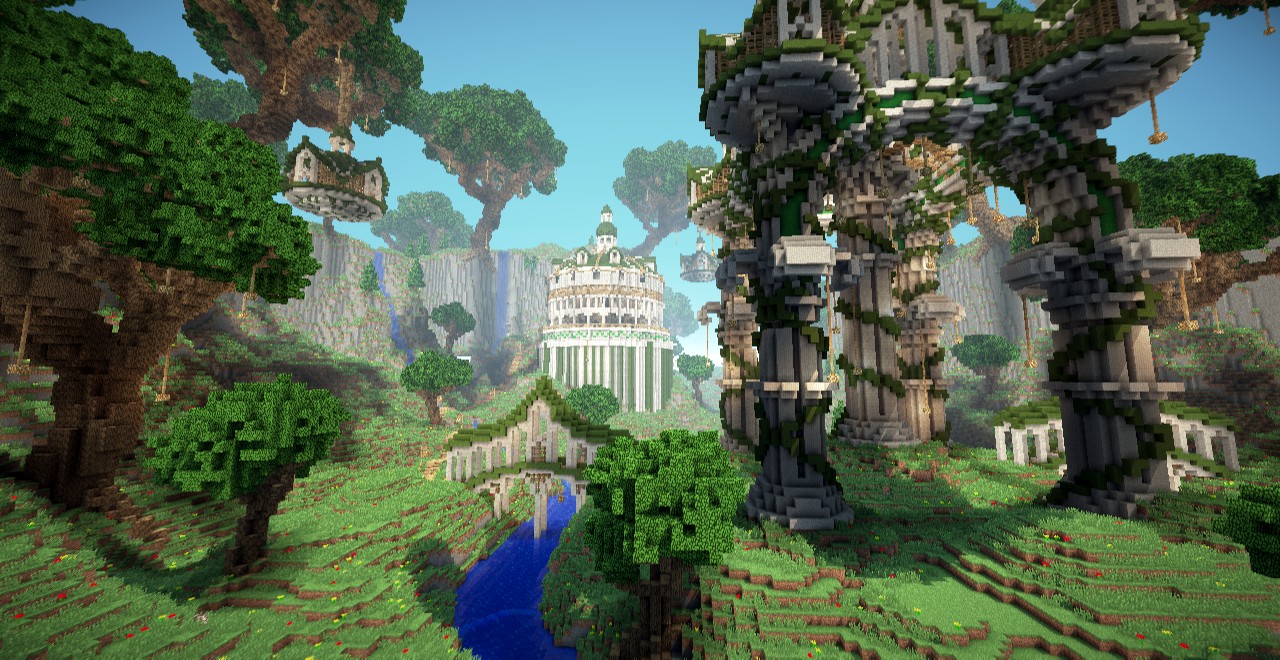 Uneditable procedural worlds are often platforms for simple but solid mechanics. Examples of this would be The Binding of Isaac..

These experiences rely on mechanics that are basic enough to be water-tight. The less variables the core mechanics involve, the less opportunists the game has to fuck over the player with things like unbeatable levels and cheap deaths.

Your project seems to fall somewhere in the middle. You aren't blasting through controlled procedural danger zones, but you aren't meandering in vast construction zones. It seems you're using your combative tools only as much as is necessary to dimension hop.

So, perhaps this is a procedural world about movement. You begin the game without the combative tools right? So you're tasked with moving strategically through the environments. The radar is a necessary tool because you primary goal is moving to the next dimension. The first weapon you get, the ShockWand, allows you to face threats, but at the expense of what was previously your primary defense, movement. As you mentioned, the StaticBlast requires ammo because it's incredibly powerful. You can both be destructive and keep moving.

I think the tool that's missing is something that introduces more unique skill to movement.  A dash, a teleport, whatever. Once I'm a skilled player, if I'm in a situation where my ShockWand is too slow and my StaticBlast is out of ammo, I don't want to helplessly wander. I'd rather use a tool I can master to make retreating skillful. When I'm going to inevitably run into enemies, I'd love to be able to choose between lead footed combat and nimble maneuvering.

I'm sure there's a lot more to come and I'm excited to see it. I have questions about style, marketability and motive, but I have no doubt all those things will be written about in due time. For now, I'll just wait to see how you move forward.