My current project is an ambitious one that requires that the player traverse hundreds or even thousands of different environments.  While one major part of keeping this interesting is with fun and varied gameplay mechanics, an equally important aspect is creating interesting atmospheres.

But if I'm going to create hundreds and hundreds of atmospheres with only myself for a team, I can't making crazy-detailed work, right?  I have to find a happy place where the quality is engaging but allows for much in terms of quantity.  That's how I ended up stumbling on this minimalist, but eclectic, art style that will perpetuate my game.

Minimalism was my go-to in part because of how easily I could manipulate it in code, in part because it will allow thousands of sprites without blowing up the game's filesize, and in part because it's easy to make.  What's more important than all of that, however, is how it interacts with its audience.  When you look into a detailed painting like, say, The Mona Lisa, you can see exactly what the subject of the painting is with very little wiggle room for imagination.  If the image, however, looked like this: 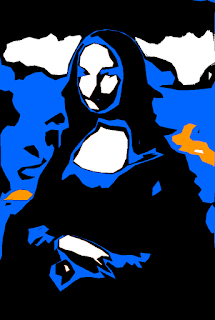 You would start filling in the gaps left behind with your own imagination, which creates something of a personal relationship with the minimalist art.  That isn't better than what da Vinci made by any means, but it gives it a unique quality that realism doesn't always grant.  Minimalist art is simply more interactive.

And, with that level of interactivity, minute changes can send ripples through the way that the viewer interprets the shapes given.  Even something as simple as shifting colors can greatly alter the way that an image is interpreted when the majority of the details are manufactured in the mind of the audience.

So, by filling my game with minimalist art I can multiply the value of certain graphics with minor changes, which creates huge value.

Allowing the ambiguity to scramble moods at atmospheres of the game is one aspect of allowing the imagination of the player to fill in details, but what about when you want to go further into ambiguity using minimalist cartoon characters.  Much like the A Clockwork Orange book art I included up there, a character can go from being transparent to being an intriguing mystery by removing just the right details and emphasizing others.  This allows me to create building blocks for, say, NPC dialogue chat heads that are way more fun and filled with more personality than I actually had to design for them.

While this is pure conjecture on my part, I think that minimalist art, like minimalist beats in music, have an easier way getting into a person's head and staying there.  There's much less information to take in, much less distraction, so you can file away the entirety of what you've seen in your brain without needing to cull unimportant info (since there isn't very much).

Just as anybody who has played Minecraft or certain NES games can recall the exact shapes from within their games, my game will be instantly recognizable to people who have seen it before.  At least, that's the hope.

Gabe has offered to help me become accustomed to the Unreal Engine so I can start working with nearly infinite tools at my disposal.  To him, this would result in my creativity being conveyed in its most pure and imaginative ways.  While I do appreciate the offer and ultimately intend to take him up on it in the future, confines and limitations in art are super comforting and inspiring to me.  Something about having to make an idea work with very little is part of how I come with many of my most creative ideas.  For example, I once got art into an art gallery with pieces drawn strictly with Bic ballpoint pens on standard white US printer paper. 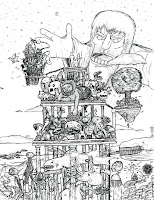 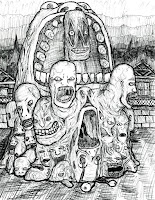 The same kind of feeling and satisfaction comes across for me when somebody on Twitter recommends I create Mudéjar style architecture for one of the realms in my game and I manage to actually create something I'm happy with in monochrome pixel art ranging from 16x16 to 48x48 pixel elements. 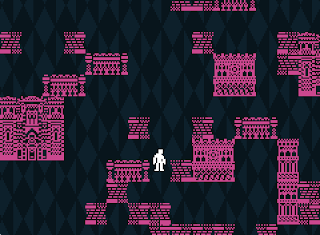 I think that those sprites are super fun, and it's entirely because I had to invent a style of pixel micropatterns I had never employed before to create more complex looking structures.

Needless to say, being this inspired is a huge element that I want to preserve when making a game with as much content as is required.

Lastly, I'd like to just touch on some of the places from which I derive inspiration.

Probably the most obvious inspiration for much of the game is Yume Nikki, which similarly has many extremely simplistic characters with wacky surrealist tendencies and a focus on wandering exploration. 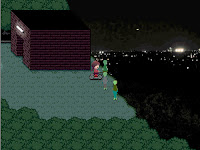 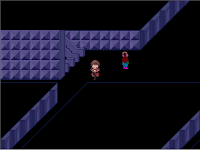 Another game that helped to inspire some of aesthetic of the game is SimTower, a game that I definitely played way too much of growing up.  Pay close attention to the simplistic yet effective way that the denizens of the tower are rendered. 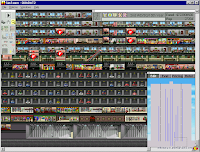 Finally, I just want to shout out the Atari 2600, which I played much of growing up.  The simple way in which graphics were rendered in that has supplied me with an equal dose of inspiration and warnings of what techniques I should stay far away from. 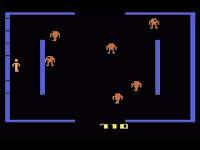 Expect to see more examples of me going crazy with the game's art in the future.  I've already not shown of a huge chunk of what the game currently has to offer here, so be prepared for more interesting things to come. 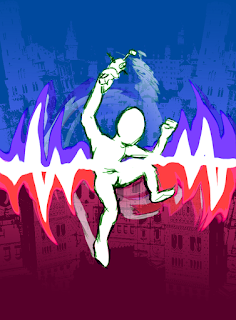 Gabe's Comment:  As a freelance game artist, my favorite jobs are the ones were I get to do art consultation. It's challenging to find the line between deliberate stylization and underdeveloped work. I think this project is dripping with character that can sometimes be lost in a lack of overall polish. This is the first time I've given a full review of William's art, so buckle in.

Consistency is by far the biggest problem game artists encounter. I think this is a challenge in all forms of art, but specifically game art. Over the span of years of development, artists tend to grow, styles tend to develop clearer rules and ultimately, visions change.  The major issue here, is that a cohesive art style is how people recognize your game. Every piece in which the style is changed or modified makes the game that much harder to consolidate into a clear visual memory.

These pieces look like they are from the same game, however, they clearly involved a dramatically different artistic process. The result is a notable gap in style. 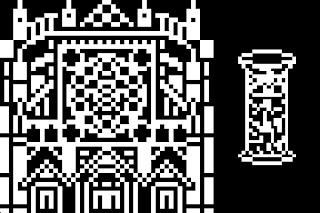 Notice how, on the left, every pixel is deliberate. There is this elaborately detailed structure built out of binary unites. The negative space is as valuable and significant as the positive space. When viewed from a distance this piece reads clearly and beautifully.

On the right, you have what the player can easily identify as a pillar but it doesn't strike the awe that the other piece does. the pixels inside the pillar feel random and sporadic. Its hard, if not impossible for me to tell what these pixels are meant to represent, cracks, engravings, moss? It feels like the time and effort that went into the first piece was simply not matched in the second.

Now of course the pillar is a smaller piece with less room for detail but, this is where committing to a style is important. The pillar needs to match the detail in the building, relative to its image size. Don't try and do more than you have room to do.

This is the sort of thing that really breaks a style. The angle of the players view can make  similar styles look like drastically different games. The characters' animations would suggest a forward, slightly downward tilted camera. this is perfectly matched in the scene on the left. The structures here look clearly grounded and inline with the player. On the right however, we have multiple perspectives represented in a single scene, making the world feel floaty and confusing.

The critique of perspective extends beyond the primary structures into the randomized floor tiles... 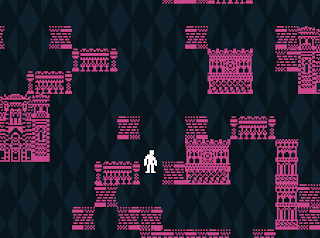 ...and, I think upward and downward character animations would go a long way for bringing the viewing angle to fruition.

Lastly, I need to address the random NPC generation system. It's so fucking charming. I really hope the NPCs contribute something significant to gameplay. They each have such unique and fascinating personalities, I wanna talk to all of them!

This style is unique and interesting. I fear it has the ability to be overlooked by people who happen to see the wrong set of scenes together. I also feel that seeing some of the many very well constructed scenes, coupled with catching gameplay, could make this project very intriguing and memorable.

I encourage you to take the time necessary to polish the universe. The very occasional totally bizarre  scene will be interesting, but don't alienate players with inconsistency. Make your style consistently recognizable, even in the strange scenes. Don't let inconsistency stifle this games wonderful charm because, god can it be charming.